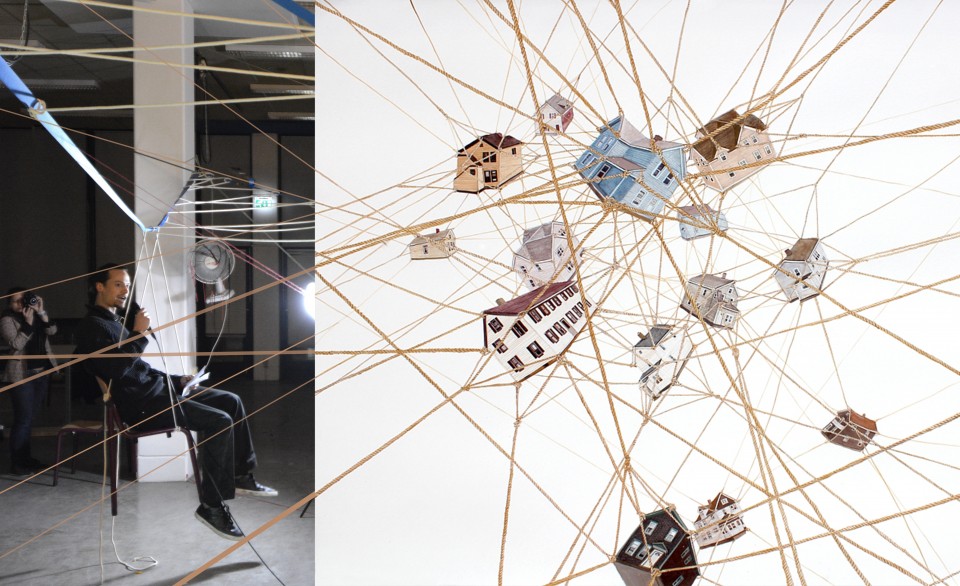 The HKU (art academy in Utrecht) came with an interesting proposal for a symposium. They aimed to create a better connection between the directions Spatial, Product and Fashion by inviting cross-over artists for a small presentation followed up by an extensive workshop. KNOL gave a workshop on how to build spatial stories. Together with the students we analyzed several of the ‘invisible cities’; short stories by Calvino. How is the narrative space injected in the story? A good writer is able to give just enough spatial descriptions to activate the imagination of the reader and by doing so, making the reader into a builder of its own ‘possible world’. During the workshop we decided to actually build ‘Ottavia’, the hanging city, but as incomplete as the narrative structure. Visitors could experience some clues of Ottavia and imagine the rest.

“If you choose to believe me, good. Now I will tell you how Octavia, the spider-web city, is made. There is a precipice between two steep mountains: the city is over the void, bound to the two crests with ropes and chains and catwalks. You walk on the little wooden ties, careful not to set your foot in the open spaces, or you cling to the hempen strands. Below there is nothing for hundreds and hundreds of feet: a few clouds glide past; farther down you can glimpse the chasm’s bed.
This is the foundation of the city: a net which serves as passage and as support. All the rest, instead of rising up, is hung below: rope ladders, hammocks, houses made like sacks, clothes hangers, terraces like gondolas, skins of water, gas jets, spits, baskets on strings, dumb-waiters, showers, trapezes and rings for children’s games, cable cars, chandeliers, pots with trailing plants.
Suspended over the abyss, the life of Octavia’s inhabitants is less uncertain than in other cities. They know the net will only last so long.”
― Italo Calvino, ‘Invisible Cities’